Create your own Social Network or Online Community - 10 tools

My cousin got a hold of me to talk about building something for her company to use that would help them with internal communication. We talked about a few obvious options – Facebook, Google Groups, LinkedIn – but none of them fit the bill. I decided to do a little research (with some help) and came up with a list of options for people looking to build their own social media network for promotion or internal communication. We tried a few out and if you have experience with any of the others, please leave a comment and let us know what you thought.

Side note: The most important thing to think about before going down any of these routes is “what am I trying to do with this thing?” You could waste a lot of time starting accounts and learning platforms before you either found what you’re looking for or quit in frustration. A few questions to ask:

OK, on with the tools… 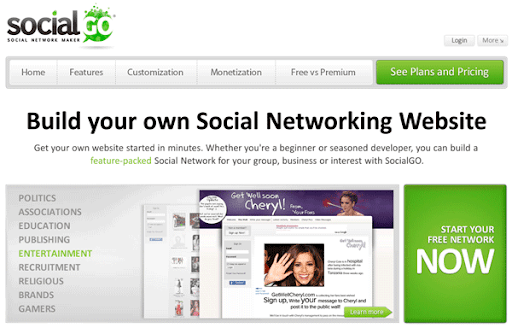 SocialGo ended up being the one we chose for a number of different reasons, mostly because it was the easiest to use and had the best feature set for a free plan. I found the controls to be intuitive and straightforward, though the “Groups” option took a little getting used to. After an hour or so of walking through it, we seemed to be on top of all of the features. One problem was the Files section which didn’t want to load. Support was not terribly helpful (“it works fine” was the basic reply, though a word or two longer) but just put yourself in his shoes. Free support for a free product? Sounds like a blast. 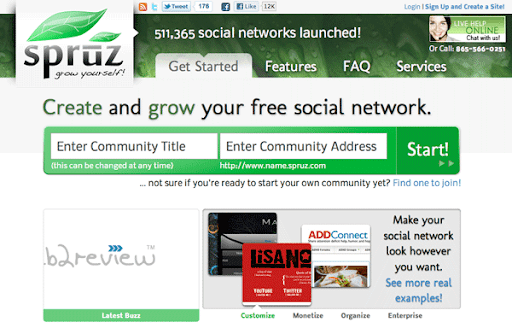 Spruz claims half a million networks created on its platform (I can only imagine) and, judging by its feature set, I can see why. Spruz is fully-featured starting right at the $4.95 plan level and allow users to create profile pages, blog entries, and paid events. The thing I love about this network is its name and the many different ways I could think of to screw it up when I tell people about it (“go to spuzz… no, spruce… no wait, spazz, that’s it”). 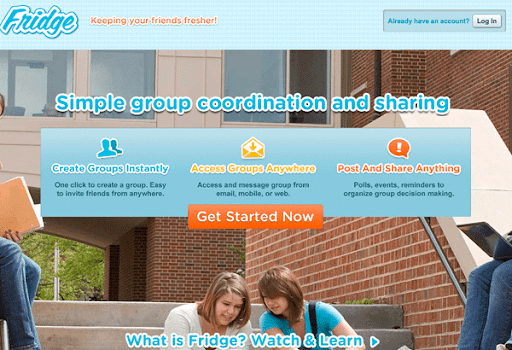 This network is definitely trying to appeal to a younger generation both in design and in features. They offer photo sharing (wouldn’t it be funny to have a social network without that), group event organizing and even text messages. According to their features page, they even support naked pictures (scroll to the bottom). Scratch that about the younger generation. 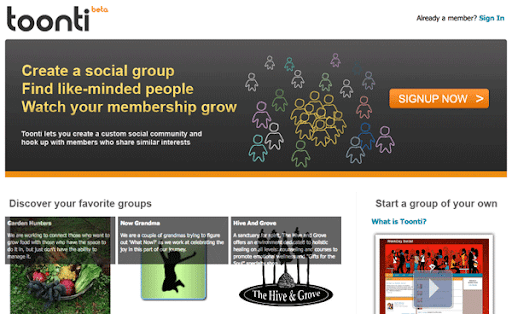 Toonti was one of the few sites that was promoting a more open group structure, something that didn’t end up fitting our needs for an internal communication tool. The sites, for the most part, look pretty similar and have all the features you might expect – blogs, photos, events, and forums. If you can take yourself seriously asking someone to “toonti me later,” then this one might just fit the bill. 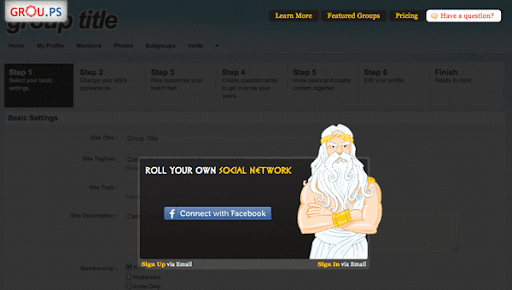 Groups had one of the strangest interfaces right when you get there. An disappointed, crossed-arms Greek god type “greets” you with a few links to log in or sign up with your email. It took a bit to see the links at the top right that can give me (a little) more information. The featured sites look quite a bit more professional and slick than the others I’ve seen and I’d give you a link there except they decided to implement navigation that doesn’t let me do that. Worth a look if only to check out the initial landing page. Great URL, though. 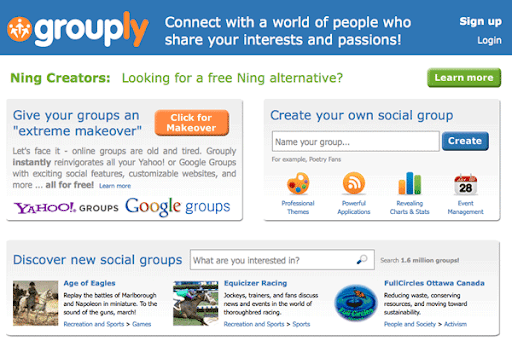 Group.ly’s schtick is that they are revolutionizing online groups, taking a jab straight at Google and Yahoo Groups. They offer themeing (likely just the same color changing options you’ll find on other sites), analytics (nice feature), and additional applications. Their marketing copy made me smile as it was quite over the top but what got me was the side-by-side comparison of a Group.ly group with a Yahoo group. Hey, to each their own and everything but I’m pretty sure the one on the left is a little easier to use. I’m just saying. 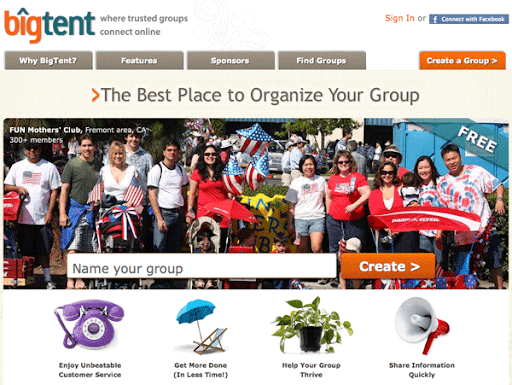 Bigtent is less “build your own social network” and more “bring your like-minded group together.” It’s built to be more of an internal tool, it seems, which was appealing to us for what we were trying to accomplish. It has a great feature set and seemed like what we needed but we chose SocialGo over it just based on usability. It was harder to find what we needed to do and, in the end, when you’re training non-tech types to use a system like this, it’s got to be easy. They do have free support and actually mention that their staff works on Christmas. Call me crazy but I see that as a down side. Also: talk about setting the wrong expectation. Maybe they need a lesson from SocialGo. 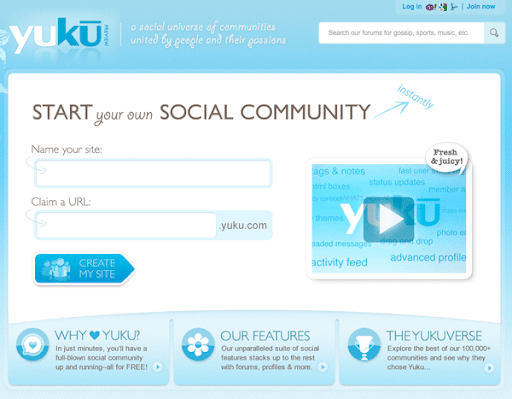 Yuku brands itself as a better alternative to Ning. They have lots of premium features to offer (use your own domain name, unlimited storage and bandwidth, free of ads) and the Official Cher Community chose them so you can’t possibly go wrong. What I noticed about the sample sites (affectionately called the “YukuVerse”) is that they were all forums so I’m wondering how much more is possible. I think what really won me over, though, was the part where they told me that making a nice page was so “dead-simple even grandma could razzle-dazzle us.” I couldn’t remember the last time I heard razzle-dazzle in a sentence but I can now. 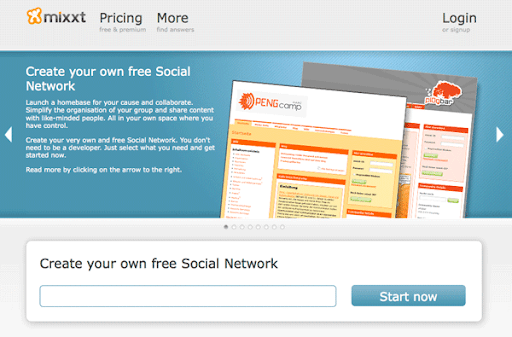 Pricing: free trial then 9-19 Euros/mo depending on desired features

Mixxt’s (try saying that out loud) seems pretty well featured and limits based on storage, transfer, and newsletters (that’s an interesting feature). The site is very cut-and-dry and everything you’d need to know is right there. In fact, it’s so free of fluff, I’m left without much else to say! The sample sites seem swell and since social sites succeed somewhat based on simple usability, I’d say give Mixxt’s simple stew a shot! 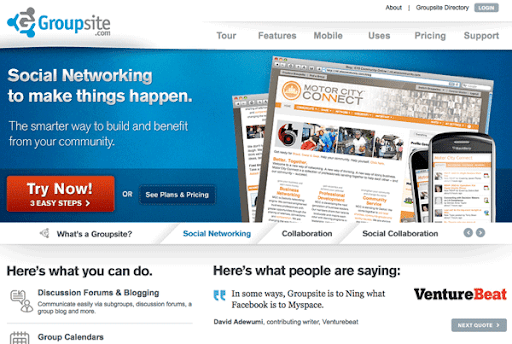 Pricing: free trial then $29 – $99/mo depending on number of users and features desired

Groupsite says that it’s nestled right where “social networking and collaboration meet,” creating a parallel universe of productivity called “social collaboration” (they didn’t mention the universe part). The site itself is well-designed and if that’s a sign of things to come with creating your own network, it’s a good sign. The sample sites look good and I really appreciated the “case study” type text along the side; it’s tough to judge how people are actually using these things by just poking around on the page. No free option for this one so you’re going to have to trust that they’re something special. Oh, just kidding… it’s hidden at the bottom of the pricing page. Why even bother offering it if you’re going to hide it? Tsk tsk…

5 Reasons You Should Fire Your SEO "Professional"