Is there a more polarizing set of words in the English language than “veggie sandwich?”

What comes to mind when you read those two, seemingly innocent little words? For some of you, it was the thought of fresh, crisp vegetables stacked high on some hearty multi-grain bread. Maybe you heard that muted crunch, saw the bright colors in your mind, made a quick mental inventory of your fridge, or all of the above. For some of you, a veggie sandwich is exactly what you need right now. 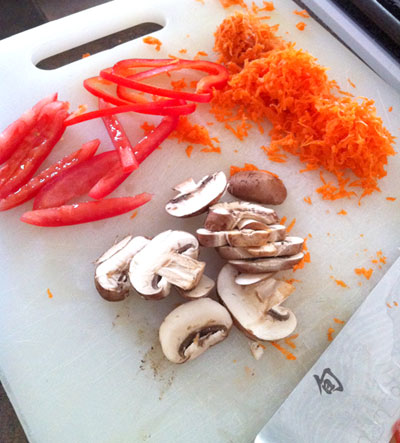 For the rest, something altogether different registered. The first word that came to mind might have been “yuck” or “ugh” or, possibly, nothing because just the idea of a veggie sandwich put you quickly to sleep with boredom. It could be the lack of substance that’s the problem or maybe it’s the mishmash of too many different flavors at once. Maybe it’s the texture, both crunchy and soft at the same time. Whatever it is, you’d rather go hungry than even think about eating a veggie sandwich.

It was only a few months ago that I fell squarely into the latter camp. The idea of a veggie sandwich as a substitute for an actual meal was hilarious, carried forth by a long history of questionable eating habits. Just recently, however, my mind was changed for the better and for good. Allow me to share my little journey with you…

I was raised eating quite well. My mom moved between different diets for her health but always remained on this side of nutritional sanity. She cooked for us regularly and, along with my dad, tried very hard to curb the vicious sweet tooth we would inevitably inherit. We shopped at co-ops, ate our fair share of carob, and had home-cooked meals as the norm.

It never concerned me that we ate a little differently than my friends in school. In fact, I was proud that I had a family that watched out for what I consumed. I remember very distinctly a student in my middle school who had his mom drop off McDonald’s almost every day for him. The class, for the most part, was jealous of this almost unimaginable luxury. I was generally indifferent as McDonald’s had never been a part of my diet. One day, though, I noticed the stack of golden, glistening fries on the wrapper of his cheeseburger and I asked “hey, can I have a fry?” With a smile, he handed one over and as soon as I took it I noticed the greasy residue on my fingers. I turned to everyone at the table and said “hey, check this out” and proceeded to squeeze drop after drop of grease out of that single fry onto the brown paper sack that held my lunch. Even Mr. McDonald’s looked a little pale after that.

Even with that earnest start, I was destined for close to a decade of poor health habits, obesity, and a near-complete lack of regard for my nutrition. It all started with veggie sandwiches. 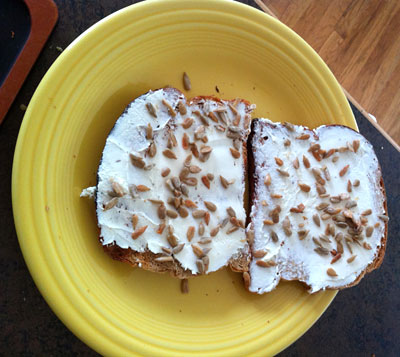 My first real job was working the front counter at a bagel shop chain in Bellevue, just across Lake Washington from Seattle for those unfamiliar with the area. The job consisted of bagging bagels, serving soup and soft- drinks, and making sandwiches. Almost everything we served was delicious and it was here that I developed my still-strong fondness for matzo ball soup and garlic bagels.

There were, however, three things we served that I could not wrap my head (or stomach) around: the bitter sesame “candy” called Halvah, the tough and smelly pumpernickel bagels and the mealtime anomaly known as the veggie sandwich.

I made at least 5 of these strange things per day and each time gave the recipient a puzzled look, unable to understand what the appeal was of a meal made almost exclusively of a side dish. Our vegetables were fresh and they tasted great surrounding some roast turkey or tuna salad but on their own between the two half-bubbles of a bagel, it made no sense.

For the next 15 years, every time I saw “veggie sandwich” on the menu, I would smile, shake my head, think back to the hippies at the bagel shop, and order something far more substantial. Meanwhile, on a potentially very related note, I had managed to reach 280 pounds and cultivated a diet composed partially of the same, greasy fries I once scorned. I regularly started each morning with a boston cream donut, a sugar donut, a large white chocolate mocha and 2 cigarettes on the way to work. This is all to say that I wasn’t terribly invested in what I put into my body. 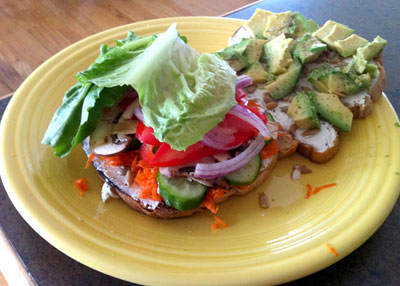 I had a bit of a personal renaissance in my mid-twenties and took control over what I was eating and what I was doing. I forced myself into vegetables but in the way that can’t really ever be sustainable. I would choke down raw broccoli, eat a bland, uninspiring salad at least once a day, and find myself in front of a tasteless chicken breast and vegetables more times than I can count. Yes, I was eating vegetables but I was determined to get absolutely no enjoyment from them.

In the end, I lost the weight – almost 100 pounds in total – and changed my eating habits significantly. It took several years to find a place in my heart for a completely vegetarian meal as it was hard to see a meal without meat as an actual meal. Still, my time in San Diego was long enough that the veggie burritos won me over and I found myself enjoying a meatless meal on a semi-regular basis.

There was, however, those silly veggie sandwiches restaurants were still trying to push on people. Just vegetables? Cold, raw vegetables and bread? Why? Don’t you have to eat 3 or 4 of those just to quell the hunger pains?

It was at the end of November last year that my wife was planning out our meals for the week and she suggested making veggie sandwiches. She loves to recreate foods that she ate in the past and this was a meal that she still thought about. A veggie sandwich so good that you didn’t forget about it seconds after you were finished? Despite my preconceived notions, this was something I finally needed to try.

Watching all the colors come out of the fridge was very entertaining. I’m finally at an age where I can take some personal pride in eating an acutely nutritious meal and I felt ready for a big influx of vitamins and minerals. Lets be clear: I wasn’t excited to eat this sandwich, just pleased with myself for growing up a little bit.

To my surprise, however, the sandwich was delicious! We used some hearty, seedy bread from PCC, some whipped cream cheese to hold everything together, salted sunflower seeds for some extra texture and flavor, and a splash of italian dressing for some sauciness. In one oversized bite, I was a convert. I felt totally satisfied afterwards – even energetic! I’d been missing out on something great for years. 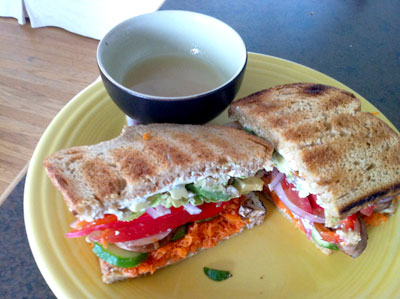 The real test, of course, was whether or not I would make one for myself. For lunch the next day, I did. It was like being transported back to that bagel shop, once again with knife in hand and colorful piles of fresh veggies waiting to be arranged and consumed. Like I do when I eat a really tasty lunch alone, I ate it like a starved animal, italian dressing dripping down my arm and shards of veggies falling out at every bite. It took me 10 times longer to make it than it did to eat it.

I take a lot of personal pride in the massive changes I’ve made over the years towards living a healthier life. it’s frighteningly easy to cast yourself as a certain type of person, someone who “doesn’t like vegetables” or “just needs a fast food meal now and then,” without thinking about where those motivations come from. A set of distinct preferences you hold today does not set the course of your life indefinitely. Keeping an open mind towards healthy, sustainable choices in your life is the only way to find what truly works for you as a person.

Trust me, if I can make my own veggie sandwich and truly enjoy it, you can do anything you put your mind to.

How to be a better self-promoter in the creative industry

I was having coffee at a local coffee shop recently and came across one of the worse examples of in-person self-promotion I’ve seen in a while. I wanted to share the experience so you know where this kind of thing can go wrong.

Working with a web designer: help us help you

This post is about helping me help you to come up with the best design we possibly can.