Please Note: I sold this company several years after this post and am no longer involved in managing or supporting the products that it sells.

May 18th of 2012, I decided to take a personal day to figure out what the next steps were, in a general sense, with my professional life. I had spent the last few months listless, intentionally overworked, and doing all the things I know make me less capable – too much coffee, staying logged into email 24/7, not getting any exercise, rarely taking breaks from the computer.

I started a journal exactly a month before this meeting with myself. Professionally, I felt stagnant. I was committed to my clients and still very much enjoyed what I was doing every day. I knew then, as I know now, that working on the web is where I’d be until I died, my crooked hands resting on a trackpad (or whatever newfangled control device we’re using in the future). But something had to change.

So I took a meeting with myself. I blocked off half the day and went to a Starbucks in the Columbia Center downtown (I’m not at all a fan of Starbucks but this place is one of a kind … see above). I turned off my phone, swore off email, and went to work. During this meeting, PROPER Web Development was born.

What is PROPER Development?

I created this entity to bring together all of the development work I was doing. It started off as a framework for a company but ended up an identity for the projects I was creating, selling, and maintaining.

A complaint you often hear from people leaving the client service game is that it wasn’t creatively satisfying for them. I know where this dissatisfaction comes from but it’s not one I share. I found I could be as creative or not creative as I wanted to be on every project I worked on. Yes, I’ve had good ideas rejected and less-than-spectacular ideas come to light but when I was in a creative slump, it was my own problem, not the problem of who I was working for.

What’s critical, for me at least, to keep in a creative mindset and not become stagnant is to come up with my own ideas and then bring them to fruition. That, I realized, was the thing I was missing and that, my friends, is what brought PROPER about. I needed an output that was my own, something I could direct, maintain, and promote that related more to output (themes, plugins, scripts) than billed hours.

The idea for the name “PROPER” was not mine; it came in a batch of other names from a brainstorm with a colleague of mine. I believe names are very important and the right one just feels like the right one. It was between PROPER and another name and PROPER won out mostly because it was easy to spell and say.

But as time went on, it felt more and more right. I couldn’t figure out exactly what it was. The idea of a proper anything is vague, relative, in some cases very hard to define. What was it about this word that felt so good?

I figured the best place to start is the dictionary. It turns out that was the only place I needed.

This was the main definition in mind when I decided on the name.

There are are countless ways to approach a web project and, as with most things, the number of wrong ways outweigh the right ones. There are standards and best practices that have been created over the years to help guide decision-making but, in the end, the answer to “how should we build this” will always be “it depends.”

A good fit between a project and a technique comes down to many considerations, including:

The right thing to do might not be obvious at first and can change over time. Finding a good fit means that you know what to look for in the beginning and your eyes are open going forward. Balance is key.

It’s hard to find examples of things that suit their purpose while looking strange or ugly. The opposite can be true, beautiful things that don’t function well, but high-functioning almost by definition has to mean good-looking.

Build quality always plays a part but I’d argue that this is clear almost immediately once you’ve interacted with something. Spend a minute or 5 with anything and it’s quality of look and feel will be obvious.

There are two things goin on here: those who care very much about functionality will find it hard to ignore the look and feel; also, there will always be something inherently beautiful about an object that does its job well.

Examples abound but these, to me, make the point clearly.

A bit vague in this context, and quite relative to boot, but still critical attributes.

A term like “very good” or one like “excellent” should immediately perk up your relativity sensors. Is OSX a very good operating system? Is Windows? Is Linux? Go ask that in a crowded coffee shop here in the Northwest and see if you can come to consensus. Go ahead, we’ll wait.

Excellence is relative so trust your gut.

That first word there, virtuous, wades into some interesting territory, no? Actually, considering their strict definitions, they both are a little heavy with stigma. I’ll start with the second one, though, it seems a little better fit here.

“Respectable” is a word I don’t use in conversation much but it’s something that crosses my mind over and over as I’m dealing with the people that make up my world. When you deal with money coming in and going out on a regular basis, it’s critical to be thinking about the value you’re providing and the value you’re receiving. If you always strive to provide value for what you’re being paid for, I would say that you are, at the very least, respectable.

That brings us to virtuous. I can guarantee you that I’ve never been called virtuous in my life, neither to my face nor behind my back. I would hope, though, that this word could be used to describe this company and the decisions we made.

Ethics and morals in business are very important to me. This has nothing to do with how we’re seen in the industry and among our clients, this has to do with feeling good, internally, about how we conduct our business. Copying content, stealing images, subscription without consent, negativity for controversy … the web is rife with poor tactics meant to gain attention and drive promotion. It’s so easy – too easy – to ignore that ever-important golden rule when your name and face aren’t directly attached to your action. We’re in a perfect position to execute clever, crafty, and back-handed actions to help clients sell more and gain attention. We can blame the decision on them, they can blame the action on us. The perfect crime.

Being respectable – even virtuous – while conducting business online helps keep the web, or portions of it, just as safe and productive as being business face-to-face.

Ballard to Fremont - Bikes and Brews

A list of the breweries in Ballard and Fremont and a few suggested schedules for the weekend days. 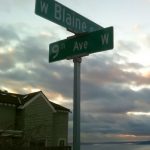 On how I have made a commitment, each day, to never getting mad, irritable, frustrated, depressed, or negative, no matter what. This probably sounds a little trite to some, maybe totally obvious to others, but it's something I needed to understand. "When the student is prepared, the teacher appears," says Brother Ali .... preach on.