Hot sauce became my go-to back in the early 2000’s when I was busy losing 100 pounds and was having trouble dealing with the loss of so much delicious food (I was eating garbage but it’s what I had become accustomed to). I read in a Men’s Health magazine that your body, when processing spicy foods, uses more calories than baseline metabolism. Whether that’s true or not, I was looking for any kind of edge I could get so hot sauce became my best friend.

The stark meals of bland chicken breast and meager salad have, thankfully, been left in the past but my love of hot sauce stayed around. I’ve learned that this “magic metabolism multiplier” was not a big contributor to my weight loss, having gained back almost 40 pounds from my lowest weight. Not that I’m complaining, this beer won’t drink itself.

I’m not a “drench every meal in spicy, red goo” kind of guy but I love trying new ones and seeing what peppers and spice combinations go with what foods. Tabasco, with it’s vinegary tang, doesn’t work on everything, nor does a basic jalapeno sauce. Chipotle is an odd one, it only works on certain dishes and it’s hard to tell which ones without trying the combination.

Secret Aardvark Sauce, however, is my all-star go-to player for almost everything.

At a family pizza night a few years ago, my step-mom, a woman with legendary heat consumption abilities, put this sauce on the table. With it’s hand-drawn label and goofy name, it looks kitchy in all the right ways. It’s a big bottle for hot sauce, 10.5oz, which lures you into thinking that it’s probably not that hot. I asked her about it and she said she found it in West Seattle. The deli highly recommended it so she picked up a bottle and here it was, daring me to try.

Using the bottle size as my heat guide, I squeezed a healthy portion on my slice pizza and dug in. I immediately realized my mistake and swallowed as fast as I could before it worked itself into my heat-sensors. This stuff was hot! And delicious!

I spent the rest of the dinner applying small doses and reveling in the taste and heat that this quirky little bottle had to offer. The heat was clear, and fast-acting, not the “creep up on you after you’ve already had too much.” And it was a good punch too so you didn’t have to drown out all the other flavors just to get a good sweat going.

But it was the flavor that really stood out to me. Not too strong and neutral without being boring. It felt like this could go on anything and only improve the situation. This sauce doesn’t seem to have an ethnicity stereotype; you can put it on foods from any culture.

So I had found my perfect hot sauce, at last! But who wants to drive to West Seattle every month? Thankfully, they have an online store so everyone can taste this little gem. In fact, it was in that online store that I discovered other Aardvark sauces I had never heard of.

I tried the Drunken Garlic Black Bean sauce and it was very good. Not the “put this on everything” type of addition that the habanero is but a great sauce for egg rolls, gyoza, or as a meat marinade. The Drunken Jerk sauce is next on the list.

A question I’m often asked by friends and colleagues is how I decide what I sell and what I give away. There’s no formula but there is a rationale. 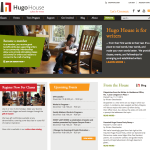