Cold brew is definitely a “thing” these days. Some “things” are “things” because they occurred somewhere extremely visible in popular culture and went on to fame. Cupcakes are a “thing” like that, an obviously enjoyable product that enjoys a bit of the limelight.

But some “things” are “things” because they’re unique, uncommon, and stand on their own. I maintain that cold brew is that type of “thing:” a discovery that coffee lovers make and never forget about.

Why does cold brew get to be the one thing and cupcakes the other? I think it all comes down to quality. Some people like cold brew, some don’t (no one I’d choose to associate with) but you can’t deny that it’s something different, better beans = better output, and care and attention is required for a great product.

So there you have it: cold brew is great and it’s here to stay.

I first heard about this wicked brew online somewhere, I can’t recall where. It sounded interesting and a bit evil in all the right ways. Made by Funranium Labs, Black Blood of the Earth (BBotE henceforth) is a very high-quality bottled cold brew that’s clearly made with passion and vim. I mean, just look at the equipment above and the bottle label design:

I was sold on the first browse of the site. But one thing caused me to pause. Can you see it? Yeah, you probably can. It’s expensive. We’re talking $55 for a liter of the stuff. That’s the same price/oz of a good (not great) scotch. When I first saw the prices, I balked a bit and held off.

But Christmas rolled around and I was looking for a fun gift for my dad. He doesn’t drink scotch, or any alcohol for that matter, but he loves coffee, particularly cold brew. Since gift-buying always trumps sound financial decision-making for me, I splurged on a bottle of The Goat. The majority of that decision was based on getting a good gift but I’d be lying if I said that part of me just wanted a taste.

The bottle came and it looked as wicked as it sounds. It’s an opaque brown color, almost jet black, and pours thicker than any coffee you’ve seen. It glugs out of the bottle snarling at you, practically daring you to try it. It makes no apologies, this beverage, and is not for the weak of heart.

I had probably 2 ounces of The Goat, on ice and with milk. First impression: it’s strong. This is probably the strongest coffee I’ve ever had (a close second is the stuff they used to brew at a software company I worked at many years ago; the secret is to quadruple the amount of coffee used and half the water) that still tasted like something I wanted to keep drinking. that’s because the strength is flavor, not bitterness (that and caffeine).

The strength (and the price) comes, primarily, from the amount of coffee being used. Funranium Labs has a comparison chart that pits the brew in question against a canned Starbucks Double Shot. The amount of caffeine in 1oz of BBotE is equal to about 36oz of Double Shot. Ignoring the different caffeine content in beans and varying extraction methods, Funranium is using over 30 times the amount of coffee in their brew. Yeah, strong and yeah, worth the price.

Funranium also prides themselves on using great coffee, which can’t be said for a cold coffee drink you can buy at 7-11.

A better comparison, though, would be to another high-quality bottled cold brew, like Chameleon or Stumptown. I like both of these quite a bit and drink them regularly. The main difference, for me, was both quality and strength. Stumptown and Chameleon won’t get you into trouble; BBotE will tear your heart out if you aren’t careful. Also, I love that you can buy different types of BBotE. You choose the type of coffee you like, which, as a bit of a snob, is important. I like Central and South American coffees more than, say, African ones. You can choose where the beans come from:

… which I think is fantastic. And, for those wondering, no I haven’t tried DEATH WISH before. 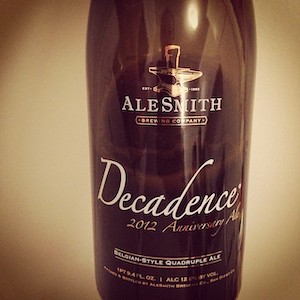