Intoxicated by the possibility of making mediocrity hard to sustain (#100ppl)

I was asked recently what my favorite Gaping Void piece is. I experienced a brief moment of intense stress, similar to the feeling I’m sure I’d have if someone offered to buy me any vehicle in the world but I could only choose one. Several rushed through my mind but I kept coming back to two of them. Hope I’m not breaking the rules too blatantly.

Brief back story: Gaping Void is the “brand name” of Hugh MacLeod, cartoonist, author, blogger, and general creativity muse. Hugh was the first blogger I ever started reading. I have no recollection of how I found his site though I’m sure it had something to do with one of his cartoons I found somewhere. This was several years ago and after that first encounter, I forgot about him entirely until maybe a year later (I’m guessing 2006 at this point) when I felt this strange need to find his site again. It took a while (I completely forgot the name, URL, everything) but I finally found it and when I did, I was elated. I started reading Hugh regularly and was particularly affected by his creativity manifesto, how to be creative. Since then, I’ve been a huge fan… bought business cards with his cartoon on one side, bought his book Ignore Everybody, and get his daily cartoon. 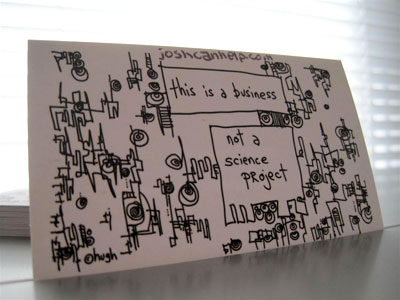 That’s the card I put together about 3 years ago. I was finishing up a Chemistry degree at SDSU, blogging about sustainable transportation, and felt like I had a lot more to offer the world. My blogspot address was on the back of this card so you’ll notice I wrote “joshcanhelp.com” on the top in ball-point. It was a transitional period, what can I say.

When I first tried to come up with my favorite Hugh cartoon, this is the one that jumped to mind. Problem is, I kind of feel like my business is a science project. It’s also ironic that I spent many years working with science projects and now I have a business…. totally unrelated to science projects. I also miss science projects, especially when I’m knee-deep in business. It was a strangely appropriate card.

I’ve since replaced my Gaping Void card with one of my own design (seemed like the right thing to do) and have also replaced this cartoon with two others as my favorites. If I had to pick one, it would be the second.

I’m listing this one first because it was the thing that scared me immensely about being on the web at first and has since has since made it feel like a great place to be. 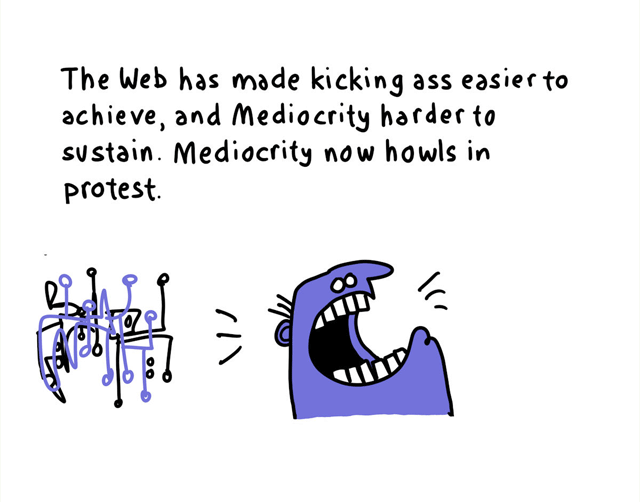 When I started designing and developing, I was always discouraged and demotivated by the really talented people out there making gorgeous things (sites, apps, interactive elements, images, missives, blog posts) on the web. It was maddening to see what I tried so hard to do but, at the time, just couldn’t. I avoid “inspiration” sites like the plague (I still do) and got angry every time I saw something beautiful on a page.

This feeling slowly (imperceptibly slow as I still retain some of the self-deprecation I’ve always had) changed into something much more palatable and closer to the truth. I had the two things that all web creators need: the desire to do well and the ability to try, learn, and try again.

It turns out, just like everything else in the whole, wide world, you don’t need natural ability to do well on the web. You just need humility and patience and passion and a good sense of humor.

Here’s where Hugh’s cartoon explains it all so succinctly: most people don’t have any of that nor do they care to develop it. This is why so much of the web is mediocre. I’ll take that a step further: this is why so much of what we’re surrounded with is mediocre. Mediocre movies, books, music, and magazines; mediocre blogs, articles, websites, and business cards; mediocre marketing, applications, layouts, and clothing. There is so much boring and safe and “meh” out there right now that you wouldn’t be at fault for assuming most of what you haven’t seen is the same.

But, you see, the web has turned that around in a huge way. Sure, I can get bogged down in LOLcatz and “viral advertisements” but I can also very easily find incredible writers, brilliant artists, unbelievable filmmakers, and unforgettable emcees. Blow off that light, thick, airy layer of fluff and below you’ll find people and groups and output that can blow your mind. This stuff doesn’t immediately rise straight to the top but it gets the attention it deserves and the fans it requires.

So go ahead and be mediocre on the web, you’ll be in good company but don’t think for one second you’re fooling anyone.

When I first saw this, my reaction was “yeah, that’s me” in the sense of “how amazing is all this possibility?” Then I took a step back and wondered if the connotation was 100% positive. 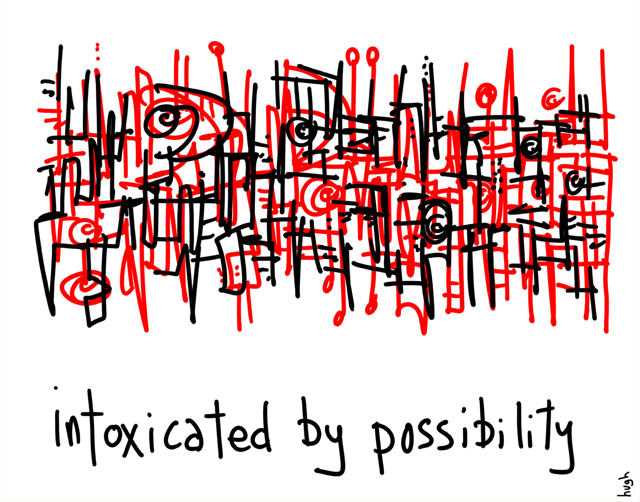 Possibility is shorthand for “the American Dream,” at least as it’s told in a historic sense. Possibility means freedom and choice, the ability to choose your own destiny… or at least just pick where to eat. If anything is possible then the best in life is right within your reach.

So, intoxicated by possibility could mean a state of rapture where the world is yours for the taking. Sounds positively dreamy!

But what about DWI, isn’t that intoxication? What about alcoholism? What about loss of control, declining personal health, and loss of productivity? And what about having too much possibility, too much choice? Hasn’t the grocery store become nearly overwhelming? Studies also show that people faced with too many choices simply won’t make a choice.

Faced with two interpretations of this cartoon, I split the difference. I think the intoxication comes from the gray area between the pleasure of having the freedom to choose and the bewilderment that comes from having too many options to consider. Having the ability to make web sites and connect pieces on the web is more fun than I would have originally though but it comes with a serious downside: what the hell am I supposed to do now?

You see, I have more ideas for web apps, start-up businesses, and online services than I could materialize in 10 lifetimes. Having all these choices is great but it leads to a very palpable feeling of being stuck. With so many things to do, all of them (potentially) commercially viable (IMHO) and even enjoyable to complete, where do you start?

The possibility is great but the intoxication is a little hard to handle at times. Thankfully, I’m a few decades away from the hangover.

Hugh has inspired me for a few years now and I’m guessing he’s got many more in him. If you’re reading this, I want to say thanks and you’ll see my print order just as soon as I can make up my mind. 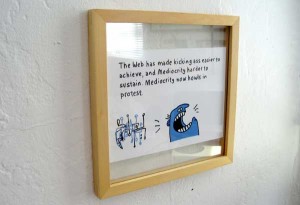 A Layman's Intro to the Semantic Web: Web 3.0, ontology, and RDFa