In keeping with the theme of sharing my journey to eliminate goals through systems, I wanted to share an update on how January went and what I expect in February.

I would call January an unqualified success. Here are the stats:

Here’s a formatted version of my weight tracking to show the overall trajectory: 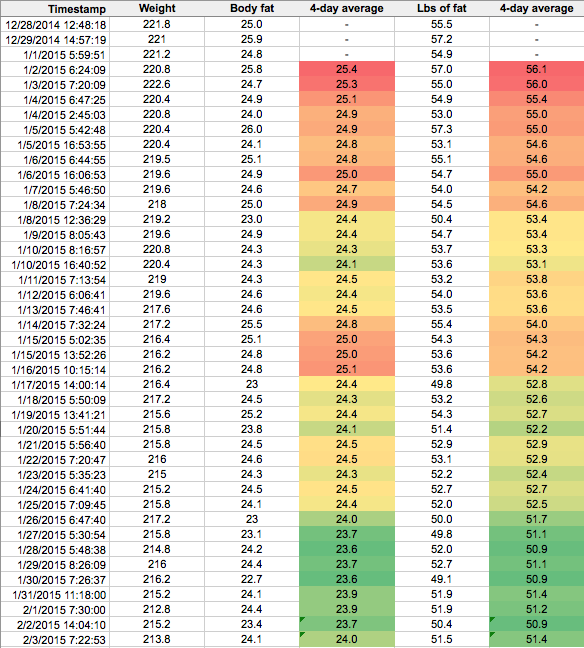 Keeping track of both body composition numbers as well as successful actions taken towards my goals was a very important part of this success, details later in this post

Overall, I’m very proud of the progress I made looking at the numbers above. Compared to, really, all of last year, this is a massive change. But the numbers don’t tell the whole story.

First, I just feel a whole heck of a lot better. I wake up with more energy and with a much more positive outlook. Physically, I feel much more capable and have a different resting posture. Just carrying my daughter around, all wiggly 22 pounds of her, is much easier. Back pain is still present, as much as before, but I think that’s related to our bed (despite just replacing a sagging spring mattress with a not-cheap latex foam one).

Second, I’m finding that taking these actions is getting easier and easier. Eating better has been easy, some of that due to eating low-carb rather than focusing manically on calories. More fat and more protein equates to less hunger, that’s been very clear in my eating habits change. Also, sugar is not nearly the problem that it used to be. Things taste much sweeter now so I don’t have the same drive to overindulge. Exercise is not totally ingrained into my process but I’m finding that the benefits – much more energy right after, improved mood, pride in accomplishment – are easily outweighing the downside of actually doing it.

I also see that I’m more focused in my work and just better at it. I’m more productive in shorter amounts of time, I’m less likely to overwork through low motivation times, and I’m just more focused. January was a solid month for both income and output, which is great. But the more important thing is that I don’t feel like I worked myself to death, like I often do after a good month. I took care of myself, got better sleep, and was more present more often.

Finally, I’m feeling good about myself as a person able to commit to something and actually do it. I talked a lot in the previous post about my negative feedback loop that fed unhealthy behavior – eat poorly, don’t exercise, feel bad, over-indulge, repeat. Now, the better I do the better I want to do. I’m trying not to over-commit to new behavior changes because I know that’s a recipe for disaster. Still, I’m moving on from a few actions and adding a few new ones.

There were three distinct parts of this system that I think went a long way towards keeping me on track. This is in order of most to least important.

The list of actions and daily point totals were a huge success for me. There were many times where I wanted to, say, cheat on a meal or have an extra glass of wine. I would look through my list, see that I was close to missing my goal, and skip it. To be perfectly honest, I’m surprised that this system worked so well in this way. I could have just as easily failed a few extra days and either fudged the numbers or just not share them to keep the failure hidden.

It wasn’t just the points, though, it was a concrete and compiled list of actions, put together when I was motivated and knew what it would take to get me to where I wanted to go. I consult this list 5 – 10 times per day. If I have a lull in work motivation, I went through the list and checked a few items off. By the time I was done, I had taken a short break, took care of myself, and was ready to jump back in. It functioned not only as a motivator but a reminder. All I would have to do is remember to check the list regularly and the rest was clear.

This component of the system functioned in a similar way as the scoreboard. It was motivation when I read it and it was a remainder of the “why” behind the what. These two combined created a very important thought process that kept me on track. 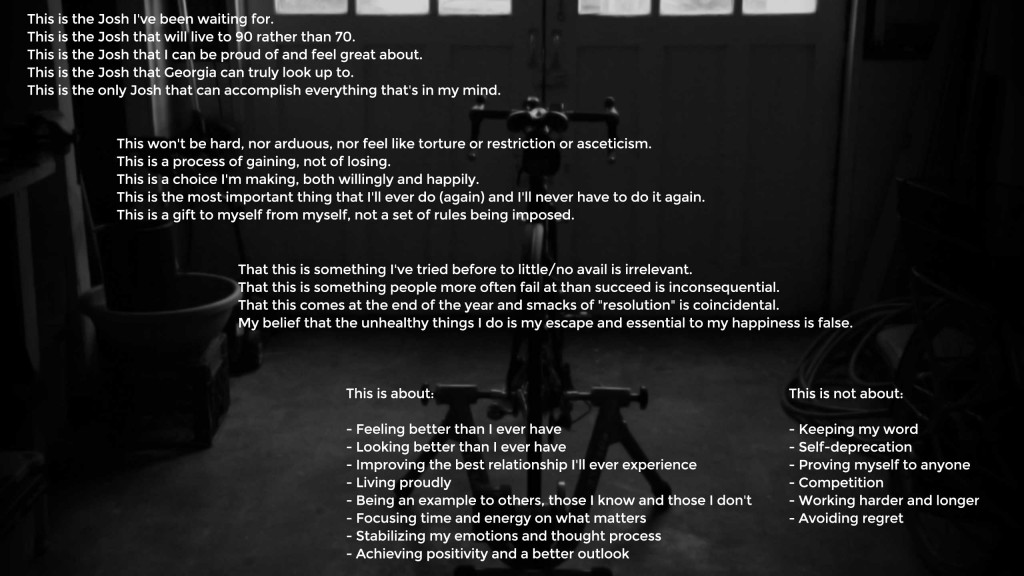 The key here was not just to read it but to internalize each line for each reading. If I found myself scanning for an easy point, I would stop, start over, make myself present, and visualize something for each line item. Some were more powerful than others so, when creating my mantra for February, I trimmed some of it out. Here’s the lines I kept that had the most influence on me:

Hearing these words in my head twice a day created a strong association between the actions I wanted to take and the life-long outcome I was striving for. Personally, I can’t just commit to something and do it, it doesn’t work that way for me. There has to be some kind of outcome and I have to truly believe and understand that the outcome is far more beneficial than the current behavior. The mantra drove this home regularly.

Multiple changes at once

Heading into January, this was the part I was most concerned about. I’ve read in a few places that making many changes at once makes it more difficult, overall, to change your habits. It’s better, instead, to concentrate on one goal at a time, create the habits around it, then move on to the next. It makes sense when you think about it: personal changes like these are hard on their own, combined would have to make it even worse.

For me, I found that to be completely false.

I think what happened here is that all of my actions – stretching, controlling intake, exercising, tracking progress – came down to a single outcome: improve my physical health. Each of the habits I was trying to form were atomic and could be achieved on their own but their result was the same. As such, I only needed to keep the result in mind to make progress everywhere. I would ask, does this improve my physical health? If not, it was easy to circumnavigate.

Another part of this is what a shock to my routine these changes were. I’m used to grabbing a bowl of granola, making a cup of coffee, and heading to work. If I inject one or two things here, why not 7? Once I’m in a groove, I can knock off a number of things on the list. I stretch while the eggs cook, track my weight while the coffee is brewing, and start writing before I do anything else. In the middle of the day, I pause for lunch but hop on the bike first, stretch when I’m done, read the mantra while I’m cooking, and chase my daughter around the house for a bit. In the evening, when I’m feeling great from exercising and can see the progress I’ve made all day, it’s easy to make a cup of tea, head to bed early, and get some reading in. One positive action can lead to 2, 3 or 4 more and, done 3 times per day, adds up to a big change.

Everything that worked last month has been carried over into February with a few changes:

The big change, though, is a concentration on a new way of thinking for me.

I’m not quite ready to write a lot about this because I’m still trying to gain a solid understanding of how it works and how it fits into my existing frame of mind. I’ve been reading A Guide to the Good Life, which is a modern interpretation of a Greek philosophy of life. The long and the short of it is acceptance of the present moment, detachment from things that are out of your control, and moving away from goals. It’s perfectly rational and, I believe, could help me move past parts of my thinking that are unhelpful.

The main goal for February is to finish and understand the book linked above, determining if this is something I want to pursue as a “philosophy of life,” and work the main tenants into my mantra. We’ll see how it goes.

This, by the way, is the explanation for the fairly morbid motivational image I chose for this month. The photo at the top of this post is from the Père Lachaise cemetery in Paris. I visited a number of cemeteries in France when my wife and I were there and found them all to be beautiful, solemn, and great places for introspection. I like this photo in particular because the path in between the graves is clear and inviting, a reminder that our time on this planet is temporary but the journey is beautiful. One of the tenants of Stoicism is negative visualisation, thinking about the worst things that can happen in life so you appreciate them fully while they are here. I can’t think of a better way of expressing this then remembering the hours spent wandering through Père Lachaise with my cousin.

Thanks, as always, for your attention and positive thoughts, should you have them. I thinking about some way to abstract this type of system into something that anyone can use and, possibly, a group that can help everyone stay on-track. If that’s interesting to you, tell me about what you’d like to achieve in the comments below and why this sounds helpful to you. 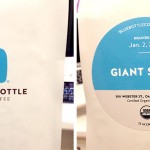