If you take a good look around, you’ll probably find it’s completely overwhelming to try to get a handle on what we’re capable of doing these days. Between amazing web applications, unprecedented communication options, and practically incomprehensible medical technology advances, we’re living in a time of incredible ideas that have come to fruition. After recovering from awe at the vast technological landscape that surrounds us, some of us have a decidedly self-defeating thought creep into our mind:

Why can’t I come up with an idea like that? 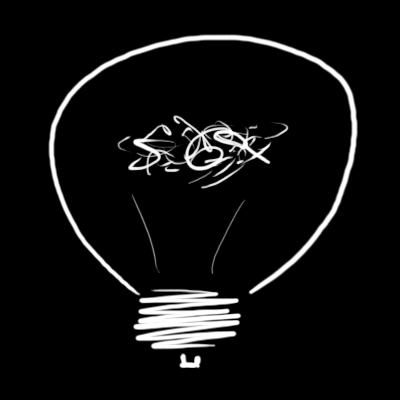 The insinuation here is that all of us are just one fantastic idea from fame and fortune. I believe this to be true. The more subtle insinuation here, however, is that it’s only the lack of a great idea that’s keeping us away from the success that is rightfully ours. This part is totally ridiculous.

Your ideas mean nothing.

I wrote a post about this before, about how an idea is only good as far as you’re willing to take it. The great (or crappy) ideas that remain in your head do no good (or bad) and just serve as an annoying reminder of your lack of time, motivation, or both. As such, the success that you’re apparently owed (I suspect this is a primarily American belief but have not gone far to prove it) isn’t being held hostage by a mental deficiency indicated by your lack of Golden Egg ideas, it is, in fact, just your lack of desire to make the idea happen. This is good news, I promise.

You see, ideas are merely step one of a one million step process and, as such, are just simple, albeit painful, indicators that your life is going to get harder and your free time will suffer a devastating loss. To most people (this off-hand majority calculation was formed by calculating how many people I know have had a great idea and acted on it to success or failure), this terrible beacon is just the scare they need to file the idea under “no thank you but I reserve the right to bitch about it when I see someone else do it.” This is a very common state of mind and it’s probably fine that way.

Your obsession means everything.

To some, this “idea as a starting gunshot” concept is familiar. It still marks a long road of hard work ending in potentially catastrophic failure but the fear that this causes is more closely related to a roller coaster than it is to a serial killer (with the understanding that some of us have similar issues with roller coasters as we do with serial killers). This fear becomes a challenge and our strong desire to meet this challenge comes in the form of obsession.

There’s more to idea-based success than just obsession but it’s the first thing you’ll want to look for when you’re evaluating the probability of your success. If you have an idea (any idea) and an obsession with making it a reality, the road ahead will be as clear as it possibly can be. Your task isn’t easy and your success anything but guaranteed but the car is packed, the tank is full, and the kids just started a movie. Pick a good route, stay alert, and stop regularly and you’ll have a nice trip. 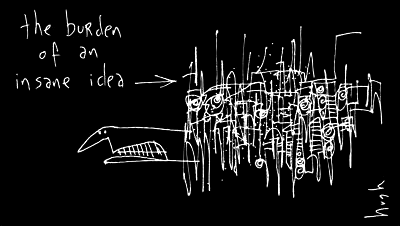 The family road trip metaphor explains the majority of ideas that we get. These ideas are like, for example, a great new way to store vegetables or a unique content distribution method or a product to clean a dashboard. These ideas are helpful, address a pain point, find a gap in the market, and succeed or fail based on decisions made throughout the process.

But there’s another type of idea that plagues us. This idea is like a non-stop, 8 Red Bull marathon drive from San Diego to Miami. This idea might not seem so good at the start and might not be well thought out but it has a champion, the driver, that infects others with his enthusiasm. This is the insane idea.

This idea is so loud and so bright and so sudden that you forget about the hard work ahead and the obstacles in the way. All at once, the idea becomes monolithic: you can’t move it and you can’t get past it, the idea must be dealt with. You’re left powerless but ecstatic, happy to hand over the controls of your life to something ethereal and unsure but so promising. Your life as you’ve known it is over.

The insane idea is the great equalizer.

Whether you’re the type to file your ideas away or grind through each one methodically, you’re completely susceptible to the insane idea. All that differs is how you react to it.

The idea-filer’s primer to the insane idea.

The first thing you’ll notice is this strange tingling in what feels like the absolute center of your body. This is your obsession germinating like a bean sprout, touching very strange, metaphysical parts of you. It’s also the mark of your eventually complete loss of rationality. Don’t be alarmed. 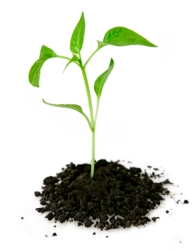 Next comes frantic planning. We’re talking drawings, sketches, late-night to early morning typing, writing, and researching. The idea isn’t fully formed yet so it feels incomplete. You’ll add features and benefits and add-ons and bells and whistles. There’s no sense of how the idea will come together or if it is sound, just frenetic, unfocused activity.

At some point during this planning stage, you reach a stage that traps many, many people (for good reason). All this planning has brought you to where you need to actually take a step forward to make the idea happen. The problem is multifaceted: there are so many steps to take and so many ways to take each of them. If you had the domain experience to generate the idea, you’re probably missing the necessary business, marketing, and technological acumen to nurture this idea to maturity. Conversely, if you’ve got the goods in the acumen department, you’re probably missing the domain knowledge about the market you’re charging into headlong.

The decisions you make at this step plant the seeds for success or failure (remembering that your idea is a failure right up to when it succeeds). Read more than you think you can handle, discuss things with a broad range of people, and take advice from people who have been down this path before. Paramount to that, don’t make decisions until you have to and, when you do make them, follow through. Nothing will derail you faster than ignorance combined with indecision. Hang on tight.

The idea-farmer’s guide to the insane idea.

You’ll also notice the obsession germinating but it will feel more familiar to you, if maybe a bit stronger than you’re used to. You’ll go through the same planning phase (like you have many times before) and face the same multitude of decisions (like you always do). But you have a different problem to contend with.

Since you’re all “been there, done that,” you have a starting point, previous experience to draw upon, and your own advice to follow. The insane idea, however, doesn’t give a flying dingleberry about any of this. The idea has control of the car and you’re just in the back seat yelling impotent directions and fearing for your life.

What starts to become clear is that you’re not out of control, you’re just playing by a new set of rules. The idea at the wheel may not know how to drive but it shares a goal with you, the frightened passenger: to see the light of day.

So just stay calm, respect the maniac at the wheel, and enjoy the scenery. The idea has no directions and no map but it has a destination and it needs your help to get there. Your idea might change it’s mind, make a sudden turn, or hop on the wrong freeway and it’s your job to remind it of where you’re both headed and guide it back on track. Remember the lessons you’ve already learned but also remember that the rules have changed. Hang on tight.

Bonus section about me: Insane ideas make life worth living

Sidenote: I’ve noticed that blog posts that talk about the author as the main character can come across, at best, as boring and, at worst, as terribly self-centered. As such, I’m trying to move relevant but non-essential personal information to the end of my posts so you can choose to just ignore it if you’d like. You’re welcome.

I consider myself, for the most part, an idea-farmer. I like good ideas and I typically know what to do when I get one: abandon it (see this great video with Ira Glass on abandoning ideas). I have have exponentially more ideas than I have time to implement them but, inexplicably, I’m always ready for another.

I’m currently working on a nice, normal good idea and my obsession with bringing it to fruition (along with a co-obsessor) is making sure it will see the light of day. This idea is fun and has become more of a hobby than a 3rd job.

I have, however, lived through two insane ideas, both of which were sudden, drastic career changes. I call them insane ideas because…

My insane ideas changed my life, twice. I consider myself lucky because both changes were very positive and both saved me from intense boredom, abject dissatisfaction, or worse. The first insane idea, to get a chemistry degree and work in sustainable transportation, was only good because it lead to the second insane idea, abandon most of my formal education to work on the web. They work in mysterious ways these ideas.

I’m always looking for people with insane ideas who either need a push forward (that part is free) or need hand-holding throughout (that part isn’t but let’s talk). There’s nothing I like more than exchanging ideas with motivated people. Maybe I’ll spark an insane idea or maybe I’ll talk you down… you never know until you ask!

RESPONSE ABILITY: An art project to benefit the homeless around the world.