What to do with great ideas (part 1)

I read somewhere that the worst thing that could happen to someone, especially someone with any kind of entrepreneurial spirit, is a great idea. Great ideas suck the life out of you, turn you into an obsessed lunatic, and can leave you with an empty home and an empty bank account.

After this last 2 weeks, I totally understand what that means.

See, I had a great idea at the end of last month. It started out as a cool idea (which is far less dangerous) but after talking with someone else about it, it turned into a really good idea. Now, after several brainstorming sessions, it’s become a GREAT idea and there’s no turning back.

I wanted to write about this great idea not to actually introduce the idea (because that would be silly at this point) but to chronicle what’s going on and what I’m doing about it. I look forward to more of these great ideas in the future and I hope to learn from my mistakes as well as my good moves. Also, if you have a GREAT idea and don’t know where to start, maybe this will help.

Find someone and find them quickly, especially if you have sense that your idea is a really good one. Find someone you trust and find someone that knows what they’re talking about with respect to your idea. If you have a software idea, talking to an English major might not be too helpful, especially as you’re trying to put the different pieces together.

Also, make sure this is someone you can trust. The chances that your idea would be stolen and implemented without credit to you is pretty low but the closer to zero the better.

So, step one, go talk to someone you trust, someone that knows what they’re talking about, and someone that might want to help. It might be hard to find the right person but this is a critical step. Here’s a few hints:

Talk to this person you find, blab the whole idea, and then get their honest feedback.

Second, get it down on PAPER. 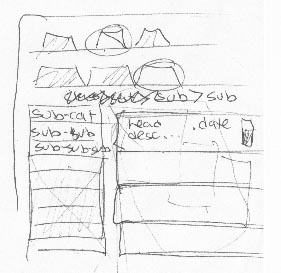 Literally on paper. Paper and pen is underrated these days (ever thought that would be said). Write furiously, draw sketches of what it looks like, take notes, just get it all down. Get the idea as it is and get the idea of what it could be. Write down everything you want it to do/be and everything it could do/be. Get everything down, the bad, the good, the ridiculous, the impossible, put it all down. Do this with the person from above if they want to be involved or by yourself if not. Keep taking notes for a few days, mull it over, let it sink in.

The other thing to say about this step is that you might find yourself with an incomplete plan and a sudden urge not to chase after this idea. You also might get so caught up in planning this thing out that you never end up doing it. Be very “present-minded” as you’re planning out your idea so you don’t miss any internal red flags and you’re sure you want to commit a piece of your life to this project.

There’s no substitute for a good plan that outlines everything you could expect in the beginning but don’t wear yourself out planning absolutely every single move you are going to make.

Third, get it down on computer.

Now it’s time to boil that plan down a bit. Type your notes up and start mocking things up that need pictures. Here’s a few tips:

Fourth, think long and hard about the money, the time, and the marketing.

Listen, I haven’t been neck deep in business forever but if there’s one thing that I know it’s that this is where things quickly break down. If you’re taking out loans for this great idea, you better have a solid plan on how you’re going to pay them back. If you’re using your down payment money for your house, make sure you have things in place to pay yourself back.

Also, consider how much time you really have to put towards this project. If you off-the-cuff assume that you’ll do all the HTML or writing or layout work but you have a full-time job and a family, think again. Time doesn’t just come from nowhere and you may have to resort to paying people to accelerate the process. Figure in extra money for staff, for incidentals, and for yourself.

Come up with an idea of how many people you need to reach and then figure out how you’re going to talk to those people. You can’t just say “email marketing” if you don’t have already have a list of people that want to hear from you (unless you’re a spammer). Your marketing plan won’t go anywhere if the only thing written down is “website.” How will people find your website?

Good luck with your great ideas!

My honest take on starting a blog from scratch. Do it because you like it and don’t assume you don’t like it because you have no idea what you’re doing.

Considering a career in software, development, or digital design? Listen to the professionals at Microsoft.